One last brew as we eagerly await my father-in-law with his machine to load the new works for The RHS Chelsea Flower Show 2010.

Next to the iPhone, the 'Kelly kettle' or storm kettle pictured below, has been a tool that fits directly into my life and has become a reliable friend... and of course, if I had to choose between the two?? Kelly kettle would win! Where would we be without a brew?!
A chance to stand back and reflect on where we have been and where we are going, whilst keeping us warm and quenching a thirst.
The Kettle is powered by fire, so also soothes my pyro-tendencies in a controlled environment.
If you haven't seen one it's a device of two halves, the bottom pan contains a small fire, - dried leaves and Willow offcuts are perfect! - and the top section is basically a double skinned chimney/flask that holds the water, the heat passes through the chimney boiling the water in anything from two to five minutes depending on how dry your kindling is.
Such a charming creation compact ,robust and works in all weathers . Don't leave your cork in though while brewing unless you have a soap on a string handy! 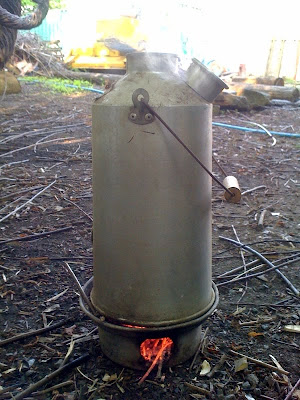 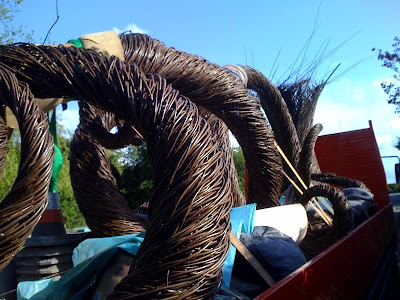 We're loaded, strapped down and ready to go. 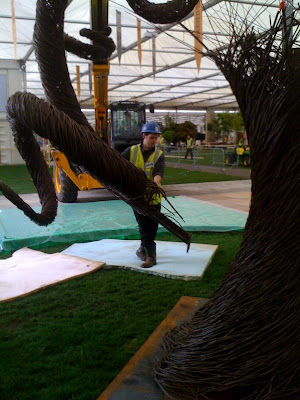 A 4am start and arriving at the showground at 7.30.
Here are the components being lifted into place, directed by Pete Loramer who personally worked on the steel frame for this giant sculpture. 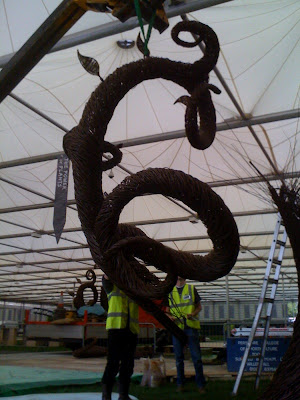 Another piece being lifted into place guided by Andrew Langley MD of Artfabs and Pete who I have strategically shot here behind the sculpture so as not to distract from it's beauty - they're not looking their best at this time of the morning! 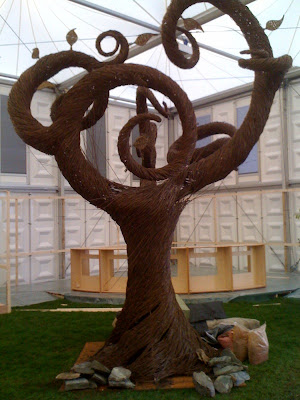 Here it is, The RHS Tree of knowledge, designed for the Royal Horticultural Society's first ever garden which sits within the continuous learning area in the Grand Pavilion .
The tree ties in with the year of biodiversity and we have invited members and celebrities to share their words of wisdom/messages that encourage life in the garden. All of which are to be written on leaves and attached to the tree... Still there's a lot to do before then!
Jeremy Irons, Chris Beardshaw, Sarah Greene, Julian Fellowes and David Bellamy are amongst the contributors. 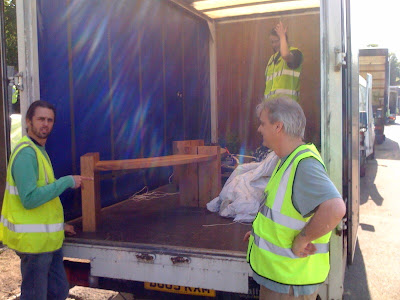 At this point I had been onsite weaving for two days and true to his word as always Leigh arrived with our bench and it's two makers.. Sue Tranter and Gary Ramsden, both of which are students at Warwickshire college studying furniture making.
They both embraced my design and the opportunity to create a piece for the show and to put the final piece towards their end of year project. Problem solving, decision making, and communicating throughout resulted in a final curved bench that is absolutely Gorgeous! 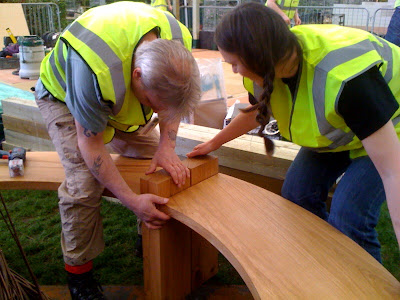 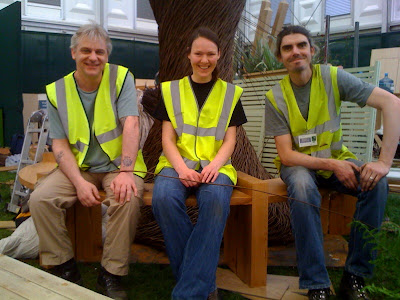 and it's comfy too! 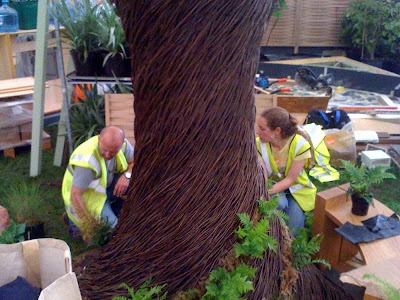 I also enlisted the help of my friend Steve who has been the plants man for all of the BBC Gardeners World Live features that I've been involved with.
He's on the Kew diploma now. Chrissie offered her help too, which was quite a relief to have them there and great to watch them reacting to the sculpture with confidence .
Posted by Tom Hare at 7:59 AM 3 comments:

I am exhibiting work at the Ferrers gallery renowned for it's British contemporary craft exhibits on the Staunton Harold Estate.

The exhibition simply called 'Made in Leicestershire', features selected artists from the said www.madeinleicestershire.org.uk.
The venue is fantastic situated within the courtyard of the Ferrers Centre for arts and crafts. I've run workshops there annually for the past few years .
I've created a gourd pod here woven in willow which sits centrally indoors, yeah I know, indoors! on the middle floor of the gallery .
Catching my eye at the show was work by Jenny Creasey who makes sculptural ceramic pieces small, delicate paper-like forms from porcelain.
Jan Bowman with intricately woven yarns and fine copper set into drift wood.
Also, Claire Fairall's hand knitted/felted bags seamless and perfectfly formed.
In fact the two floors of work delivers a real cross section of talent in Leicestershire, the exhibition is on until the end of June.
Check it out, grab a coffee and a cake in the courtyard and then walk it off in the grounds for a very pleasant day out! 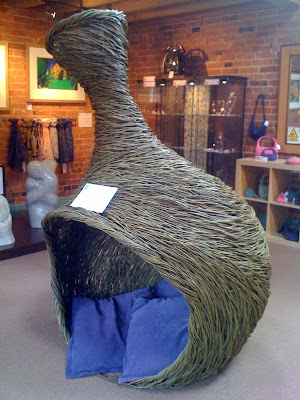 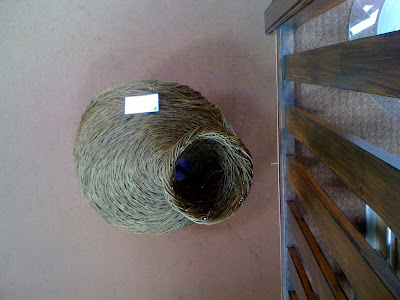 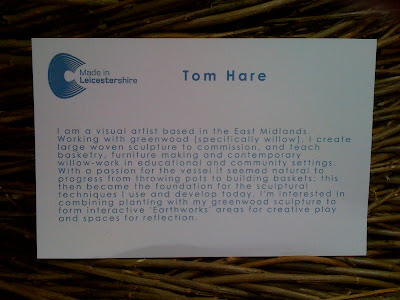 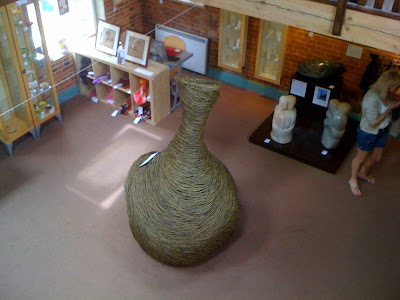 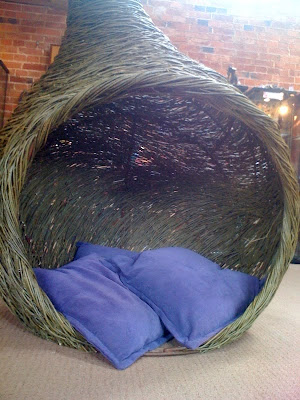 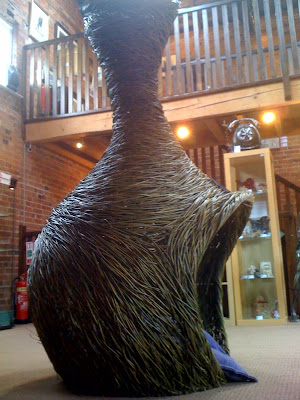 Wakehurst Place is Kew Garden's country garden set in the beautiful West Sussex countryside.
This time they've asked me to create a feature in their wild meadow where this year they've been working hard on an apiary. 2 of the 4 hives were in action today... more to come.
The exhibition will feature a closer look at the world of the sweet and fundamental importance of bees existance for all life on earth.

The large flower is 11 feet tall and has been woven around steel in a Flanders willow which will mellow to a kind of coppery colour as it seasons.
The bees are also steel framed to which I've woven a steamed Salix Triandra and a vivid yellow willow, the name of which escapes me...
The idea is to use the arch feature as a view point to observe the bees and lean on the fence and have a natter.
It was a very long day, a 4.30am start should be back for 9pm !... I am though, very pleased with the result and I hope you like it too.

Thanks to Ian for all the support and the wedge of carrot cake! And to my Dad, for driving and grafting. 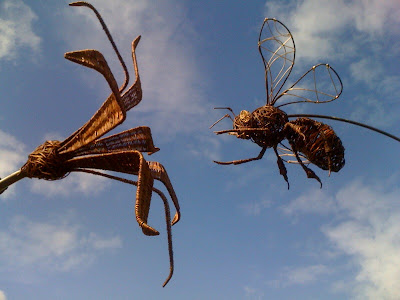 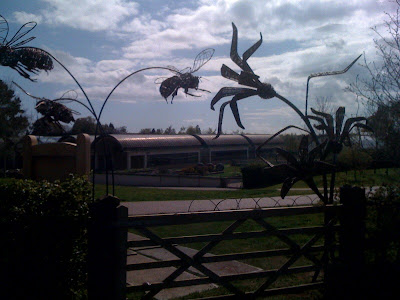 View over the millennium seed bank. 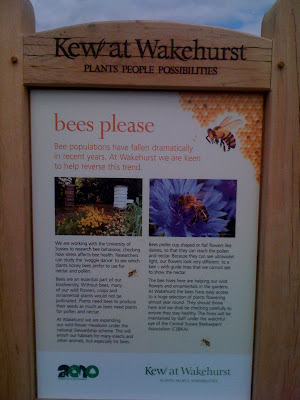 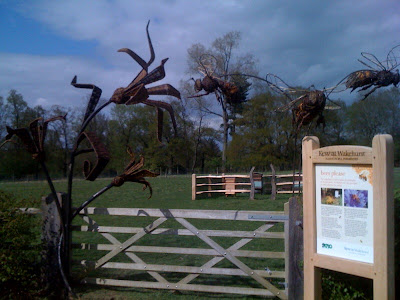 View of the apiary through the new gateway feature. 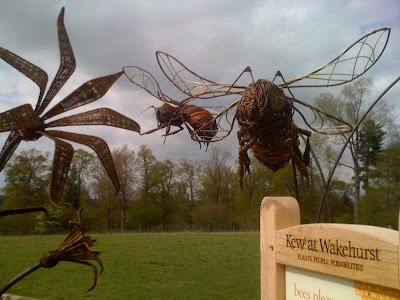